July Update from the Office of Indigenous Education 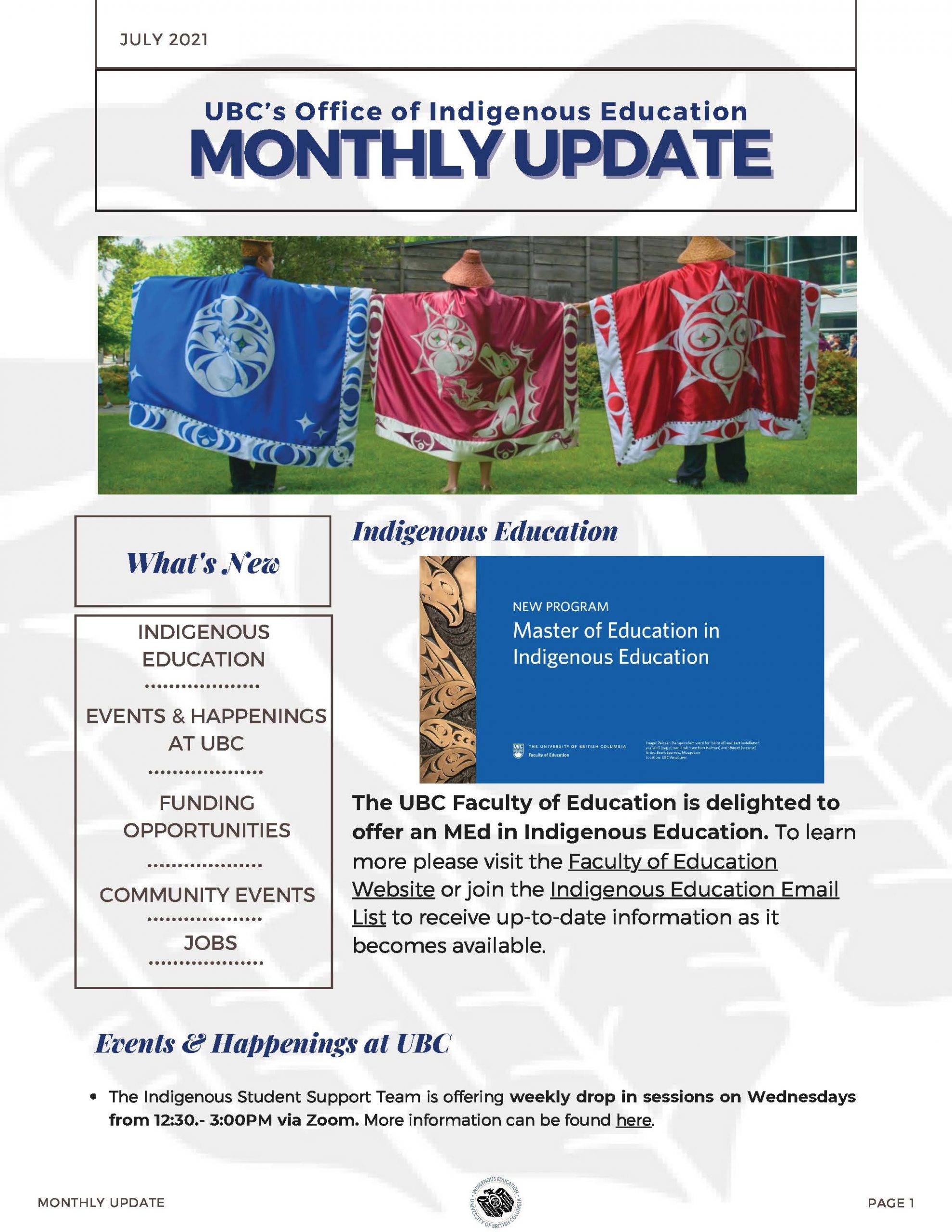 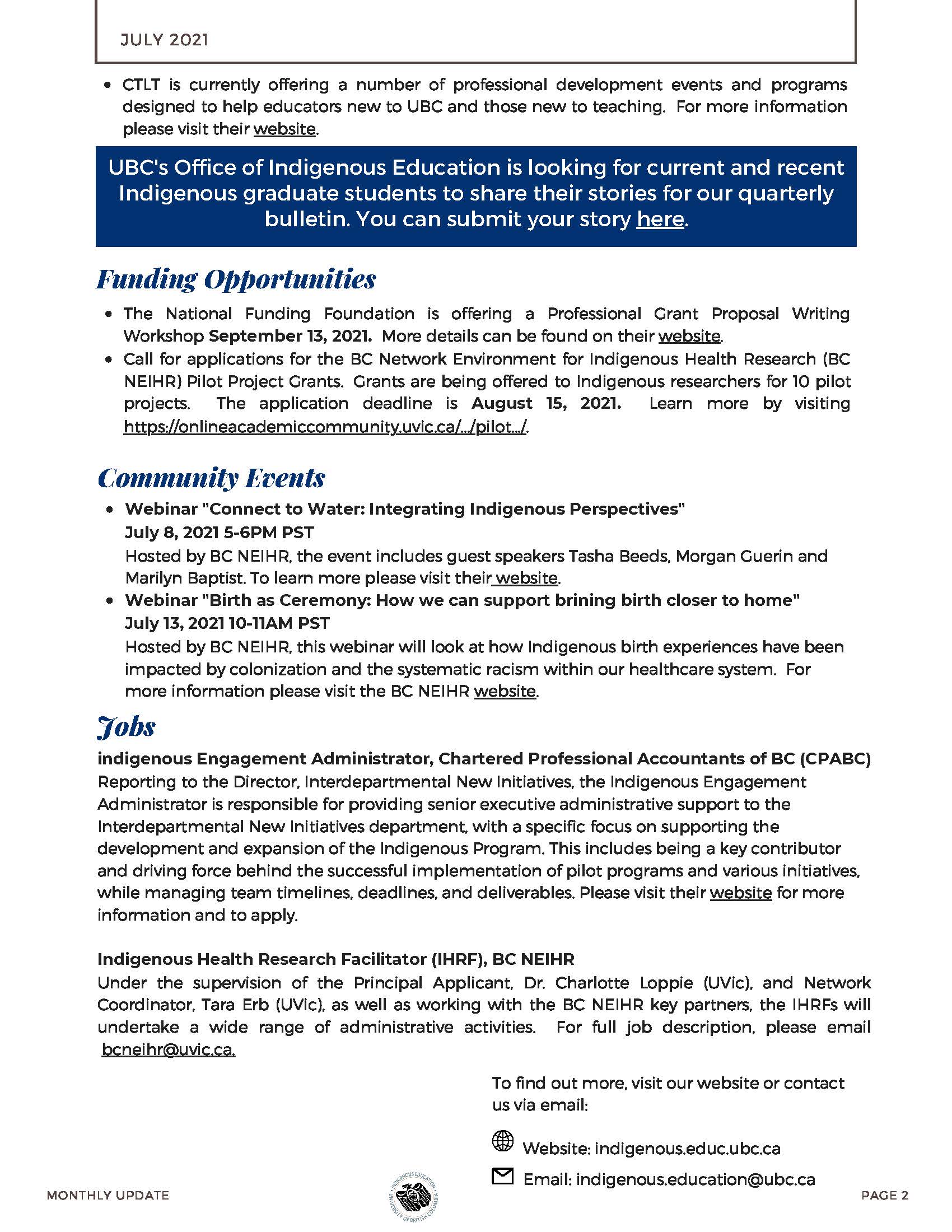 re their stories.  Sharing stories helps to inspire others and foster a sense of community.  Stories will be featured in the Office of Indigenous Education newsletter and on our website.  If you’re interested in participating, please fill out the form below.  Please contact indigenous.education@ubc.ca if you have any questions.

Please join us for his talk: Sitaskotowin: Tying together the Indigenous Knowing in the Teacher Education Field Experience.

Join us for conversations with NITEP Alumni 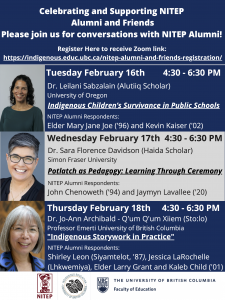 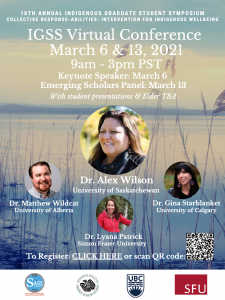 Join us for the 18th Annual Indigenous Graduate Student Symposium. The IGSS will be held over two Saturdays with a keynote address on the opening day and student presentations to follow. 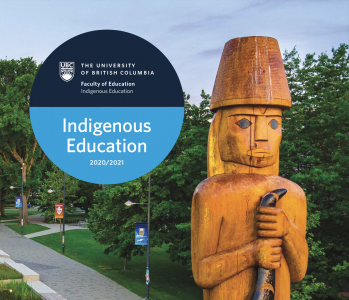 Learn why UBC Indigenous Education is the right choice.

The Office of Indigenous Education will be hosting daily sessions online through Zoom in celebration of Indigenous Peoples Month.

The goal of these sessions is to promote and celebrate Indigenous knowledge and ways of being through community, storytelling, sharing with Elders, beading, baking, and more. Sessions are open to everyone!

Cara-Lyn Morgan is a Canadian poet and artist. Her work explores cultural duality, femininity, the historical and present-day impact of Colonization, and the complexities of truth and family. More information about Cara-Lyn and her work is can be found on her website. Her books can be found here.

Marny Point is from the Musqueam band. She completed both her degrees, a Bachelor of Education and a Masters of Educational Technology, at UBC. Marny has been a Lecturer in the First Nations and Endangered Languages program, teaching the intermediate level of the Coast Salish traditional Musqueam language course, hən̓q̓əmin̓əm̓. Marny is the Urban Program Coordinator for NITEP at UBC-Vancouver, and is currently a PhD student at UBC.

Musqueam Elder Larry Grant was born and raised in Musqueam. He is presently assisting in revitalizing hən̓q̓əmin̓əm̓ in the Musqueam Language and Culture Department, and co-teaching the introductory hən̓q̓əmin̓əm̓ course through UBC. Larry is the Elder-in-Residence at UBC’s First Nations House of Learning. He is a Faculty Fellow at St. John’s College, and the inaugural Honorary Life Fellow for Green College. In 2010, he received the Alumni Award of Distinction from Vancouver Community College, and in 2014, he became an Honorary NITEP Grad.

Mary Jane Joe is from the Ntle’kepmx Nation with a B.Ed (NITEP) and M.A. in Educational Studies. She has taught First Nations Studies and Aboriginal Studies for a total of 18 years with NITEP/UBC and at Langara College in Vancouver. She has retired from teaching and now is an Elder-in-Residence at Langara College and works with Indigenous Artists and educators (LTTA.CA) within public schools to bring Indigenous peoples history, traditional teachings and perspectives into the classrooms.

Verna Kirkness, who is Cree, began her early education career in the classrooms of day and residential schools in Manitoba in the 1950s, as both a teacher and principal, and continued to an associate professorship at the University of British Columbia in the 1980s and 1990s. In 1984 Ms. Kirkness played a key role in the development of Ts’kel, which is a graduate program in Education for First Nations students at UBC. In 1987, she was involved in the establishment of the First Nations House of Learning. She spearheaded and coordinated a major public/private $2 million fundraising campaign to build a First Nations House of Learning longhouse. She holds a Master of Education from the University of Manitoba, was awarded an Honorary Doctor of Laws from the University of Western Ontario and and Honorary Doctorate of Humane Letters from Mount Saint Vincent University. She was the recipient of the 1990 BC Educator of the Year Award, the 1990 Canadian Educator of the Year Award, and the Commemorative Medal for the 125th Anniversary of Canada.

Elders Swelímeltxw and Siyamtelot (Rudy and Shirley Leon). Siyamtelot is Okanagan and registered Stó:lō by marriage. Swelímeltxw is Stó:lō from Sts’ailes. Siyamtelot is a NITEP alumna who attended the Chilliwack field centre and received her BEd in 1987. Swelímeltxw is a traditional teacher and mentor who has provided workshops and teachings to students and staff in the K-12 and post-secondary educational environments and shared his knowledge in holistic approaches to social, spiritual and restorative justice.

Dena Melinda Leon (Lhkwemiya) is of Stό:lō – Okanagan heritage and a member of the Sts’ailes Band, near Harrison Mills, BC. She was given her name, “Lhkwemiya” by her paternal grandfather Ed Leon. It refers to the third of three mountains near Sts’ailes and was given to her because she is the third of three daughters. Her father, Swelímeltxw/Rudy Leon, a skilled drum maker and buckskin dressmaker, taught her how to work with buckskin, leather and other crafts when she was young. Due to her keen interest in the Northwest Coast arts and her innate creative talent, she has developed a unique style of art all her own in sewing and beading. She created a beaded bouquet for her daughter’s wedding in 2012, which inspired her to learn different methods of beadwork. She designs beaded flowers for all occasions.

Jennifer Anaquod is a member of the Muscowpetung Saulteaux First Nation in Saskatchewan. She graduated from NITEP in 2012 and received her Diploma in Education in 2013. She went on to earn a Master of Education in Curriculum and Leadership with a Ts’’kel designation (a specialization in Indigenous studies). Jennifer has spent over 15 years working in early childhood education (ECE) and 3 years teaching adults Aboriginal ECE theory and practices. She has also served as the Coordinator for the NITEP Fraser Valley and Lillooet field centres. Jennifer is currently a PhD candidate in Curriculum Studies at UBC.

Chett Monague N’Dizhnikaaz, Chimnissing N’dooibaa miinwaa maang doodem. Hello, my name is Chett Monague, I am anishnaabe from Chimnissing (Beausoleil First Nation) from the loon clan. Currently I work with the University of British Columbia as a Recruiter Advisor, Aboriginal Students. My work has granted me the ability to travel across Canada to offer support and resources for Indigenous learners interested in post-secondary education. As a graduate from a Bachelor’s of science and a Bachelors of education it is my hope to break down barriers and provide students with a positive role model.

Recipes
Reading
Beading
Arts and Culture
Organizations to Donate To

To ensure our sessions remain a safe and respectful environment to share Indigenous knowledge, culture, and community, those who wish to register must do so in advance by emailing indigenous.education@ubc.ca to receive the zoom invitation. 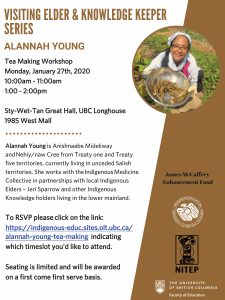 To RSVP, please complete the form below.

She works with the Indigenous Medicine Collective in partnerships with local Indigenous Elders – Jeri Sparrow and other Indigenous Knowledge holders living in the lower mainland.

Seating is limited and will be awarded on a first come first serve basis. 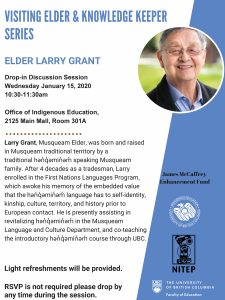 CANCELLED DUE TO WEATHER

Join us for a drop-in discussion session with Larry Grant on Wednesday, November 13th as part of the Visiting Elder & Knowledge Keeper Series. Light refreshments will be provided.

RSVP is not required please drop by any time during the session.

Larry Grant, Musqueam Elder, was born and raised in Musqueam traditional territory by a traditional hən̓ q̓ əmin̓ əm̓ speaking Musqueam family. After 4 decades as a tradesman, Larry enrolled in the First Nations Languages Program, which awoke his memory of the embedded value that the hən̓ q̓ əmin̓ əm̓ language has to self-identity, kinship, culture, territory, and history prior to European contact. He is presently assisting in revitalizing hən̓ q̓ əmin̓ əm̓ in the Musqueam Language and Culture Department, and co-teaching the introductory hən̓ q̓ əmin̓ əm̓ course through UBC.

Experienced educators will share how schools are building upon the teaching and learning practices of the IB Primary Years in ways that successfully engage Indigenous learners, knowledges, traditions and their communities.

Program research will be highlighted and discussions leading to research opportunities will form part of the day.

Lunch will be provided. 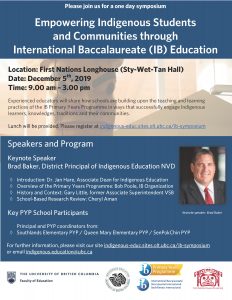 The PYP in Action

For further information, please email indigenous.education@ubc.ca or register below: